It’s safe to say that almost every kid has a “dream bike.” For some it might by based around their favorite superhero, for others it might just be their favorite color. Nick Burton’s dream bike involved his favorite hockey team, The Chicago Blackhawks.

Our Central Territory Manager, Evan Paterson, first met Nick at the 2019 Chicago Abilities Expo. Nick took our ASR2011 for a test drive, and we immediately knew it was the perfect bike for him.

After the ride, we asked him what his dream bike would look like and he replied with “The Chicago Blackhawks,” His favorite player is Jonathan Toews.

Because Jonathan Toews’ dad, Bryan Toews, helps fundraise a Freedom Concepts bike each year through the Cerebral Palsy Association of Manitoba, we decided to reach out to him and and his wife, Andrée Gilbert, to tell them about Nick Burton’s dream bike. They immediately loved the idea and decided to contact Jonathan Toews to tell him about it.

Before we knew it, the Jonathan Toews Foundation offered to pay for the bike, and we were working with the Chicago Blackhawks to create some custom Blackhawks decals for Nick.

Once the bike was complete, we sent it to Chicago, where Jonathan Toews presented the bike to Nick after a Chicago Blackhawks exhibition game.

Complete with custom seat embroidery and a hockey stick parking brake, this ASR2011 is one of the coolest ASRs we’ve made to date.

We would like to thank Jonathan Toews, Bryan Toews, Andrée Gilbert, The Jonathan Toews Foundation and The Chicago Blackhawks for helping us make Nick’s dream bike a reality. We hope it proves to be a valuable therapy tool, and a way to have fun, for many years to come.

Learn More About Our Adaptive Bikes 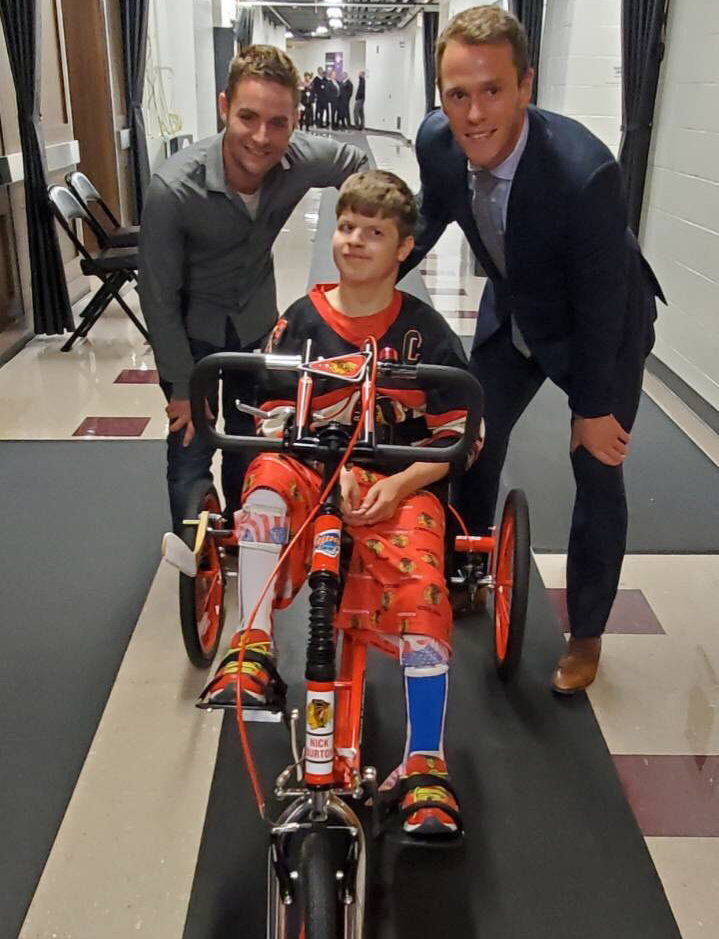